Dhiru Bhai Ambani the founder Chairman of Reliance Industries Limited believed that, “If you’re born poor it’s not your fault but if you die poor it’s your fault” His story is a true story of ‘Rags to riches’. Could he have achieved success on such a large scale and become so rich without having strong probabilities in his horoscope?

His horoscope contained the potent seeds of his gigantic success. Just for those who have no faith in astrology and believe in man’s own action and efforts I wish to clarify that timely action and continued efforts succeed only if the probabilities of success exist in that person’s birth chart.

Dhiru Bhai Ambani was born on 28th December 1932 at Chorwad, Gujarat, into a Modh family. His father was a school teacher. Dhirubhai Ambani started his entrepreneurial career by selling “bhajias” (a snack) to pilgrims over the weekends at Mount Girnar in Gujarat. [Astrology of Success in Business]

In the year 2000 just two years before he died he was addressed as the “greatest creator of wealth in the century” by the Federation of Indian Chambers of Commerce and Industry (FICCI) and also named as the Indian Entrepreneur of the 20th Century.

Let us reveal the Planetary Secrets of his Horoscope: 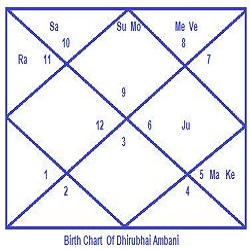 In Vedic-astrology a Raj-yog is formed when the lord of any kendra (square) houses viz. 1st, 4th, 7th or 10th is placed in a trine house viz. 5th or 9th house or vice versa. Here in Dhirubhai’s birth chart the 9th lord Sun is posited in the ascendant. So a Raj-Yog is formed.

It is noteworthy that the yoga causing planet Sun gains extra strength because of the following points:

• The 2nd and 6th cusps also fall in the constellations of Sun.
• Sun is well posited in the navamsha chart in a friendly sign.
• Sun is exalted and well placed in the dashamsha chart.

The strong position of the yoga causing Sun in all the three charts lends extra strength to this Raj-yog. The house of luck having association with the ascendant gave him extraordinary good luck, wealth and lifelong prosperity. [Does Your Birth Chart Promise Prosperity?]

In Vedic –astrology Gajkesary-Yog is considered very auspicious and has been observed in many charts giving wealth, happiness, name and fame. Here in Dhirubhai’s birth chart Jupiter being placed at a square position from the Moon gives rise to this most auspicious yog.

This auspicious yoga gave tremendous wealth, name and fame to the native. It is noteworthy that the yoga causing planets viz. Moon and Jupiter are placed in the ascendant and the house of profession respectively. This gives further strength to this yoga and raised the financial and social status of the native through his professional excellence (10th house) and personal enterprise (1st house).

This yoga is further crowned by the fact that it is also formed in the navamsha chart involving the house of profession (10th) and the house of trading and administration (7th). [Gaja Yoga: Happiness and Prosperity giving Yoga of Astrology]

In addition to the above combinations the following points in the birth chart are also responsible for Dhirubhai’s ‘Rags to Riches’ transformation at a fast pace:

• There is a link among all three trine houses viz. 1st, 5th and 9th as the 5th lord is posited in the 9th house whose lord Sun is posited in the ascendant. This is most auspicious occurrence and favoured him a lot.

• The 5th lord Mars is well placed in all the three charts and has very high Shadbala strength. Mars is also the lord of the constellation of the 7th house cusp. Such auspicious Mars gave Dhirubhai a sharp and trade-efficient intellect.

• Venus is very auspicious for this native and its placement in the 12th house was instrumental in tremendous wealth and comforts of life.

Gear up! Get your chart analysed for any such probabilities so that, ‘you could strike while the iron is hot’.