You must have seen people talking to priests for the best muhurt of kanchhedan sanskar, also known as karnvedhan (ear piercing). So, why it is so important? Actually, there are 16 sanskars of hindu religion among which kanchhedan sanskar is one of the important rituals. Boys are supposed to undergo kanchhedan sanskar in the right ear while girls have to get the left ear pierced. 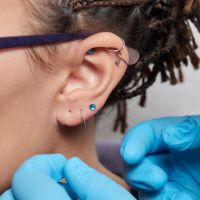 Generally, it is believed that infant’s ears lobules are pierced for protection (especially against evil powers). The basic reason behind karnchhedan i.e. ornamentation cannot be refused for its importance.

Many people say that a stubborn child can be controlled by ear-piercing while others think that ear-piercing is the best option to enhance intelligence of the child. You will be surprised to know that there is a very big scientific reason behind ear piercing –

The main scientific logic behind karnchhedan sanskar is that it enhances of intellectual property of the child and also helps to gain knowledge. The meridian point of ear lobes connects the right and left hemisphere of the brain together. When this point of the ear gets pierced, it activates both the hemispheres of the brain. As a result, it brings intelligence and knowledge for the child.

Many people believe that ear piercing enhances immunity in the body.

Also, the pressure point in the ear which is pierced gets stimulated for maintaining digestive system of the human being.

One more good thing abot ear-piercing is that it works like acupuncture and stimulates the pressure point in the ear which increases eye sight.

It means, oh dear god, let us hear ausipicious words from our ears during engagement in yajnas. We should see holy things from our eyes. We praise the lord with steady limbs.

Moreover, there are predetermined times (muhurts) on which karnchhedan of a child should be done. According to astrological beliefs, ear piercing should be done on a day of bright fortnight (shukl paksh). According to hindu beliefs, a child should be subjected to karnvedhan sanskar between the 6th to 16th month of his/her birth. Also, if karnchhedan sanskar of a child is not possible on the first year of the child, it should be performed in another odd year i.e. third, fifth or seventh year.